Aikido Surprise on a Train Ride

"Seeing me stand up, the belligerent drunk relished the chance to focus his rage. 'Aha!' he roared, 'A foreigner! You need a lesson in Japanese manners!' He landed a heavy punch on the metal pole beside him to give weight to his words." 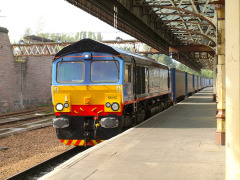 In the inspiring story below, a young, Western Aikido master confronts a dangerous, out-of-control drunk on a train in Japan. What happens in the end is a surprise to all, and is a major turning point in the life of the young master. Consider what you might have done if you were this young man sitting on the train in similar circumstances. Powerful food for thought.

A major turning point in my life came as an unexpected surprise one day in the middle of a quiet spring afternoon on a sleepy train in the suburbs of Tokyo.

It all started as the old train car was clanking and rattling over the rails. It was comparatively empty – a few housewives with their kids in tow, some old folks out shopping, a couple off-duty bartenders casually glancing through the sports section of the local newspaper. I was gazing absently at the drab houses and dusty hedgerows.

Then as the doors opened at one unremarkable station, the calm afternoon was suddenly shattered. A man on the platform bellowed at the top of his lungs, yelling violent, obscene, incomprehensible curses. Just before the doors closed, the still yelling man staggered into our car.

He was big, drunk and dirty. He wore laborer's clothing. His ragged shirt was stiff with dried vomit, his hair crusted with filth. His bloodshot eyes were bugged out, beaming scorn and hatred to all who caught his glance.

Screaming obscenities, he swung his big fist wildly at the first person he could reach, a scared young woman holding a baby.

The blow glanced off her shoulder, sending her spinning into the laps of an elderly couple. It was a miracle that she was not badly hurt and the baby was unharmed.

As the frightened young woman ducked for cover, protecting her baby, the elderly couple jumped up and scrambled toward the other end of the car. They were terrified.

The big laborer aimed a wobbling kick at the retreating back of the old lady. "You old whore!" he bellowed, ‘I'll kick your ass!" He missed, as the old woman barely scuttled to safety. This so enraged the wretched drunk that he grabbed the metal pole in the center of the car and tried to wrench it out of its stanchion. I could see that one of his hands was cut and bleeding, likely from an earlier scuffle.

The train lurched ahead, the scattered passengers frozen with fear.

I was young then, and in pretty good shape. I stood six feet, weighed 225 and spoke fluent Japanese. I'd been putting in a solid eight hours of Aikido training every day for the past three years. I liked to throw and grapple. I thought I was tough. Trouble was my martial arts skill was untested in actual combat. As students of Aikido, we were not allowed to fight.

My teacher, the founder of Aikido, taught us each morning that the art was devoted to peace. "Aikido," he said again and again, "is the art of reconciliation. Whoever has the mind to fight has broken his connection with the universe. If you try to dominate other people, you are already defeated. In Aikido, we study how to resolve conflict, not how to start it."

I had listened to his words. I tried hard. I wanted to quit fighting. I had even gone so far as to cross the street a few times to avoid the the pinball punks who lounged around the train stations. They'd have been happy to test my martial arts ability.

My forbearance exalted me. I felt both tough and holy. Yet in my heart of hearts, I was still dying to be a hero. A part of me still wanted a chance – an absolutely legitimate and justified opportunity – to save the innocent by destroying the guilty.

'This is it!' I thought to myself, as I stood up tall and proud to confront this menace to society. 'This slob, this cruel animal, is drunk and mean and violent. People are in immediate danger. If I don't do something fast, somebody is going to get hurt. It's time to take his ass to the cleaners.'

Seeing me stand up, the belligerent drunk relished the chance to focus his rage. "Aha!" he roared, "A foreigner! You need a lesson in Japanese manners!" He landed a heavy punch on the metal pole beside him to give weight to his words.

Holding on to the commuter strap overhead, I gave him a slow look of disgust and dismissal. I gave him every bit of pissed-off nastiness I could summon up. I planned to take this filthy turkey apart, but he had to be the one to move first. And I wanted him mad, because the madder he got the more certain my victory. I puckered my lips and blew him a sneering, insolent kiss.

It hit him like a slap in the face. "All right!" he hollered, "You're gonna get a lesson." He gathered himself for a rush at me.

Yet just as he was about to lunge, a single-syllable shout pierced the air.

The word instantly sliced through the thick intensity of the moment. I was stunned by the strangely joyous, lilting quality of it – as though you and a friend had been searching all over for something important that was lost, and he had suddenly stumbled upon it and loudly shouted to you, "Hey!"

I wheeled to my left; the drunk spun to his right. We both found ourselves staring down at a little old man. He must have been well into his seventies, this tiny gentleman, sitting there immaculate in his kimono. He took no notice of me, but beamed delightedly at the laborer, as though he had a most important, most welcome secret to share.

"C'mere," the old man said in an easy Japanese vernacular, beckoning to the drunk. "C'mere and talk with me." He waved his hand lightly towards the seat next to him.

The big man followed, almost as if on a string. He planted his feet belligerently in front of the old gentleman, and towered threateningly over him.

"Talk to you!" he roared above the clacking wheels, "Why the hell should I talk to you?"

The drunk now had his back to me. If his elbows moved so much as an inch, I'd drop him in his socks.

The old man continued to beam at the laborer. There was not a trace of fear or resentment about him. "What'cha been drinking?" he asked lightly, his eyes sparkling with interest.

"I been drinking sake," the laborer bellowed back. "And it's none of your goddam business!" Flecks of spittle spattered the old man.

"Oh, that's wonderful," the old man said with delight, "absolutely wonderful! You see, I love sake too. Every night, me and my wife – she's 76, you know – we warm up a little bottle of sake and take it out into the garden, and we sit on the old wooden bench that my grandfather's first student made for him. We watch the sun go down, and we look to see how our persimmon tree is doing."

"My grandfather planted that tree, you know, and we worry about whether it will recover from those ice storms we had last winter. Persimmons do not do well after ice storms, although I must say that ours has done rather better than I expected, especially when you consider the poor quality of the soil. Still, it's most gratifying to watch when we take our sake and go out to enjoy the evening – even when it rains!"

He looked up at the laborer, eyes twinkling, happy to share his delightful information.

As the bewildered drunk struggled to follow the intricacies of the old man's conversation, his face began to soften. His shaky fists slowly unclenched. "Yeah," he said slowly, "I love persimmons, too…" His wavering voice trailed off.

"Yes," said the old man, smiling and leaning slightly forward, "and I'm sure you have a wonderful wife."

"No," replied the laborer to this so strangely friendly man in a softer, sullen voice. "My wife... she died last year."

The suddenly changed drunk hung his head in heavy sorrow. Then, gently swaying with the motion of the train, this big, burly man, who was so threatening just a moment ago began to sob. "I don't got no wife. I don't got no home any more. I lost my job. I don't got no money, I don't got nowhere to go. I'm so ashamed of myself." Big tears rolled down his cheeks. A spasm of pure despair rippled through his body.

Above the baggage rack, a brightly colored ad trumpeted the virtues of suburban luxury living.

Now it was my turn. Standing there in my well-scrubbed youthful pride, with my make-this-world-safe-for-democracy righteousness, I suddenly felt dirtier and more ashamed than he was.

Just then, the train arrived at my stop. The platform was packed with bustling humanity. The busy crowd surged into the car as soon the doors opened. Maneuvering my way toward the door, I heard the old man speak sympathetically.

"My, my," he said with heartfelt care, yet undiminished delight. "That is a very difficult predicament, indeed. Sit down here and tell me about it."

I turned my head for one last look before leaving the now-crowded train. The laborer was sprawled like a sack on the seat, his head in the old man's lap. The old man was looking down at him with smiling compassion, his hand stroking the filthy, matted head of this confused soul.

As the train pulled away, I sat down on a bench dazed with all that had just happened. What I had wanted to do with muscle and meanness had been deftly accomplished with but a few kind words.

What I had just witnessed was true Aikido in combat. The essence of it was love, as the founder had always said. I determined then and there to practice this beautiful art with an entirely different spirit. I yearned to be able to move from the heart like this old man in using the deep principles of aikido. Yet it would be a long time before I could fully embody what I had seen on that unforgettable ride.

Note: Terry Dobson was a highly respected Aikido master until the time of his death in 1992. For more on his life and history, click here.